2D HYSCORE is essentially a two dimensional ESEEM experiment in which correlation is transferred from one electron spin manifold to another. 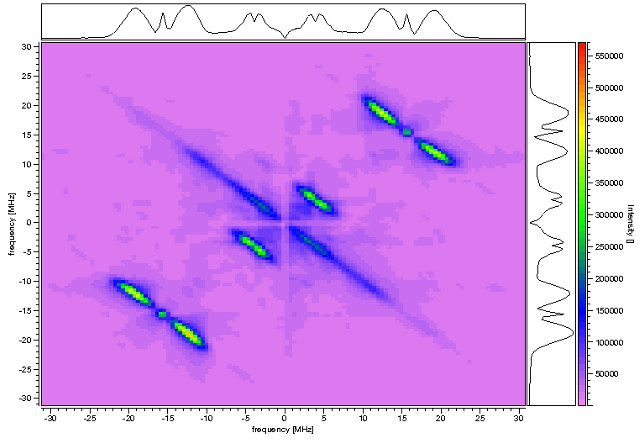 As in an ESEEM experiment, the peaks observed are essentially an NMR spectrum of nuclei that are coupled to the electron.  HYSCORE allows one to take a complicated ESEEM spectrum and extend the data into a second dimension  Peaks appearing in the upper right and lower left quadrants typically arise from nuclei in which the hyperfine coupling is less than the larmor frequency.  They appear at the larmor frequency, separated by the hyperfine coupling.  Peaks from nuclei in which the hyperfine interaction is greater than the larmor frequency appear in the upper left and lower right quadrants.  The HYSCORE spectrum can get very complicated for nuclei with a spin of I > 1/2 with many peaks arising from the complication of additional nuclear zeeman and quadrupole levels.  Even with the complexity of the spectra, HYSCORE on systems with multiple nuclei can make ESEEM spectra that would be difficult or impossible to interpret much more manageable.