In ESEEM experiments, the modulation of the echo intensity as a function of the delay between the microwave pulses is monitored.  This modulation is due to the coupling between the electron being probed and nuclei within the system.

The two most common forms of ESEEM experiments use either a two pulse or three pulse sequence.  In both cases, the resulting spectrum is essentially an NMR spectrum of the nuclei that are coupled to the electron being probed.

In 2P ESEEM experiments, a typical Hahn Echo sequence is used and the π pulse is incremented out to longer periods of τ.  The amplitude or integrated area of the echo is measured for each τ, giving rise to a time domain ESEEM spectrum. 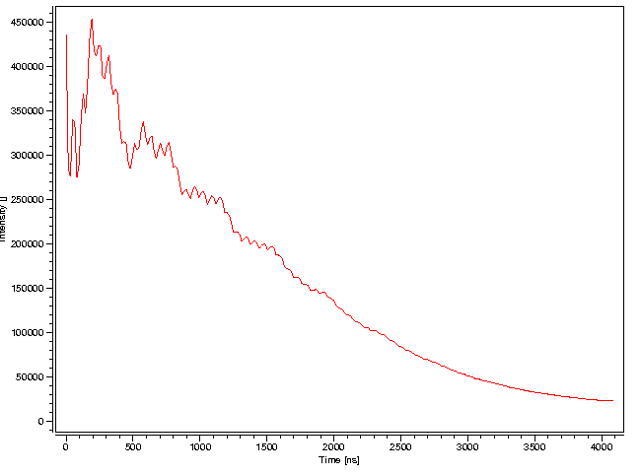 Since magnetization is stored transversely during the τ mixing period, these experiments are sensitive to T2, or TM.  The modulations from the nuclei are observed over the background of the echo decay due to transverse relaxation.  This leads to linewidths that can be much broader than the inherent nuclear linewidth due to short T2 times minimizing the number of modulation periods which can be observed.  In 2P ESEEM, both positive and negative peaks are observed that can yield additional information, but can complicate congested spectra.

In 3P ESEEM experiments, τ is held constant and T is incremented, giving rise to a modulation in the three pulse stimulated echo.

As with 2P ESEEM, the echo intensity is measured as a function of τ + T, yielding a time domain spectrum that can be converted to a frequency domain spectrum via a Fourier Transform. 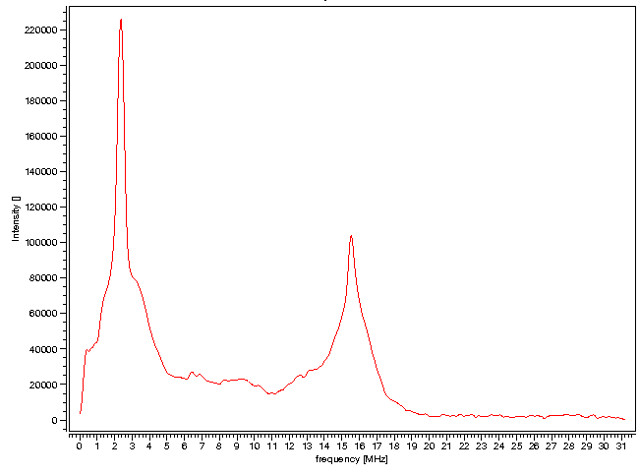 Since magnetization is along the z-axis during the mixing period T, 3P ESEEM is sensitive to T1 relaxation (however, keep in mind that the period of τ is sensitive to T2, so long values of τ may be inaccessible).  Since T1 is typically much longer than T2, 3P ESEEM spectra can yield much narrower linewidths than those obtained in 2P ESEEM due to the effects discussed above.  Due to the nature of the experiment, 3P ESEEM suffers from blind spots at nuclear frequencies with a period of 1/τ.  Because of this, 3P ESEEM experiments are typically conducted at several values of τ.  However, this effect is not always detrimental as it can be utilized to minimize effects from things such as large matrix proton peaks coming from water.  Unlike 2P ESEEM, only positive peaks are observed in the frequency domain spectrum.

In both types of ESEEM, the spectrum that is collected is a time domain spectrum where the periodicity of the modulations observed are indicative of the degree of coupling between the electron and the nucleus.

A Fourier Transform of this time domain spectrum yields a frequency domain spectrum that can be thought of as an NMR spectrum of all of the nuclei which are coupled to the electron.  The information that can be obtained from these experiments, hyperfine interactions as well as nuclear quadrolpolar interactions for I ≥ 1, can give a measure of unpaired electron spin density on a given nucleus as well as the distance between it and the electron.