In ESE-ENDOR experiments, nuclear transitions are driven directly using an RF pulse and the effect on the detected echo is monitored as a function of the frequency of the RF pulse.

There are two main types of ESE-ENDOR, Davies and MIMS.  In both types of experiments, the population of an EPR transition is inverted by a π pulse in Davies ENDOR and a π/2-τ-π/2 sequence in MIMS ENDOR.  An RF nuclear π pulse is then given to invert the population of a nuclear transition.  The effect that this RF pulse has on the detected echo is monitored as a function of the frequency.

The effect of this first π pulse is to burn a "hole", or invert the population of the electron spins.  This π pulse is typically selective so as to burn a narrow hole in the electron spins.  If the RF π pulse is not in resonance with any nuclear transitions, the "hole" remains unperturbed and an inverted echo is observed following the Hahn Echo detection sequence.  In the case where the RF π pulse is in resonance with a nuclear transition, some of the "hole" is moved outside at a distance that is a function of the hyperfine coupling. 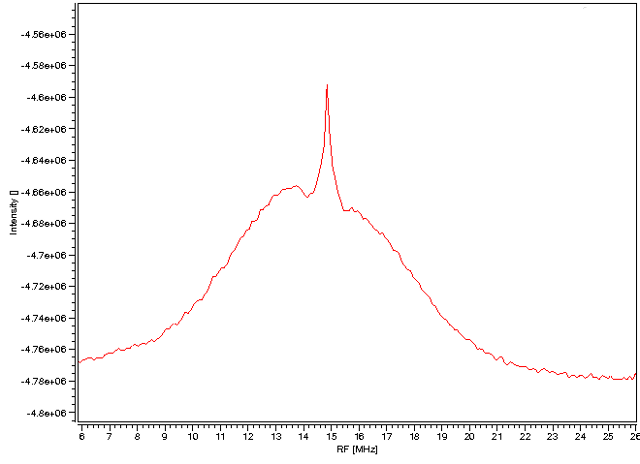 Therefore, the initial "hole" becomes smaller and the inverted echo becomes less negative.  The intensity of the inverted echo is monitored as a function of the frequency of the RF, yielding an NMR spectrum of the nuclei in the vicinity of the electron.  Due to this behavior, Davies ENDOR is insensitive to small hyperfine couplings as the portion of the hole that is moved by the RF pulse is still within the inverted region being monitored.  For weakly coupled nuclei, it is typically better to use Mims ENDOR.

In Mims ENDOR, a π/2-τ-π/2 is used to create polarization  for the electron spin and a third π/2 pulse creates a stimulated echo at time τ.  During the mixing period between the second and third pulses, a π RF pulse is used to excite a nuclear transition.  The frequency of this pulse is varied and the stimulated echo intensity is monitored.  The resulting spectrum is an NMR spectrum of the nuclei in the vicinity of the electron being probed. 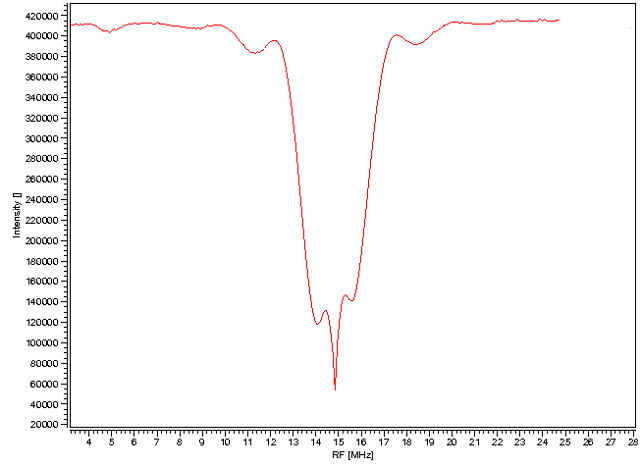 One aspect of the Mims technique that differs from a Davies ENDOR spectrum is the presence of "Mims Holes". 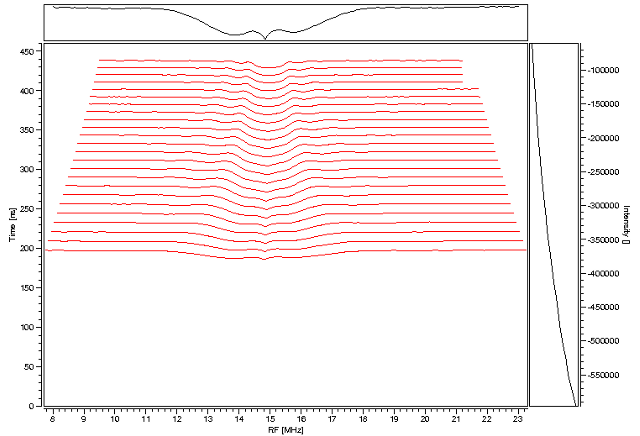 These "holes" in the spectrum are a function of τ.  They appear in the spectrum symmetrically about the Larmor frequency for the nuclei, separated by 1/τ (Hz) and every whole number multiple thereof.  For example, at a τ of 100 ns, the "holes" would appear at +/- 5MHz from the central transition.  Therefore, in order to avoid misinterpretation of the data, Mims spectra are typically collected at various values of τ.